Cast Iron Waste-lines & The Problems They Can Cause 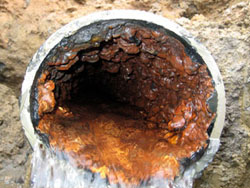 Many of the older homes through-out Brevard County have cast iron waste-lines. Most homes built prior to 1970 have cast iron waste lines. Most cast iron sewers along the coast occlude with a rusty build up on the walls of the pipe over time. This build up can flakes off, blocking the flow of the sewer. As these pipes age and with enough neglect and incompatible soil conditions, cast iron sewers can ultimately collapse and require replacement, or relining.  Both replacement, or re-lining are very expensive and can cost $10,000 or more depending on the size of the home.

During a home inspection on any home with cast iron, we flow large amounts of water to ensure adequate drainage. We fill the bathtubs, do shower-pan test and flow a lot more water than a typical home with PVC waste lines. We also recommend every buyer get an in-line camera inspection to help find out the condition of the pipes. Even flowing large amounts of water will not guarantee no problems exist.  An in-line camera inspection is the only way to see the condition of the pipes. These camera inspections cost $250 – $300.  We had an instance this year with a home built in the late 50’s. We flowed a lot of water and everything drained fine, unfortunately a week after the buyers moved in to the home, the waste lines backed-up. They had an in-line camera inspection and the camera un-covered old rags and some construction debris in the pipes.  These items were apparently positioned in a manner that did not obstruct the drainage during the home inspection, but once the family moved in, the debris dislodged resulting in a back-up.  The items were removed and the system worked fine for a few days and then backed up again. They had another in-line camera inspection on the pipes and found that large clumps of paper products (Toilet Paper) had clogged the pipes.  The inside walls of the pipes turned out to be jagged / heavily corroded and this condition caused toilet paper to snag on to the inside walls of the cast iron pipes. They also, discovered some tree roots that had grown through the pipes as well.  To correct this problem cost around $10,000.

Had the in-line camera inspection been performed prior to closing, this would likely have been identified. Often times home buyers are pressed for money. Between the home inspection, closing cost and the other expenses that come with buying a home, buyers can be overwhelmed. I’m sure had the system not drained properly during the home inspection, the buyers would have had an in-line camera inspection, but unfortunately everything drained fine at the time of the inspection…..and that was even after we flowed large amounts of water trying to stress the system. If you are purchasing a home with cast iron waste lines, spending an extra $250 – $300 is money well spent and can save you thousands of dollars in costly repairs, or replacements in the future.  Don’t assume that since everything drained fine during the home inspection, that your cast iron pipes are not deteriorating.  We currently live in a home with cast iron waste lines and have had a couple of problems in the last 3 years.  We found out from our neighbors that they had to have there cast iron pipes replaced a year after they moved in to their home. Another thing to be on guard for is if you are told the cast iron has been replaced. Often the cast iron from the house to the road is replaced. That does not mean the cast iron through out the home has been replaced. Make sure you find out the extent of the replacement. The seller should be able to provide you with supporting documentation on the work performed.

Spend the extra money and have an in-line camera inspection performed prior to closing, if the home you are buying has cast iron waste-lines. It could save you thousands of dollars and a lot of headaches.

These pictures show how the pipes corrode and degrade.

Corroded from the inside 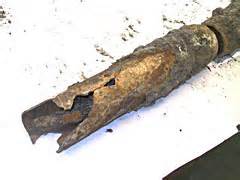